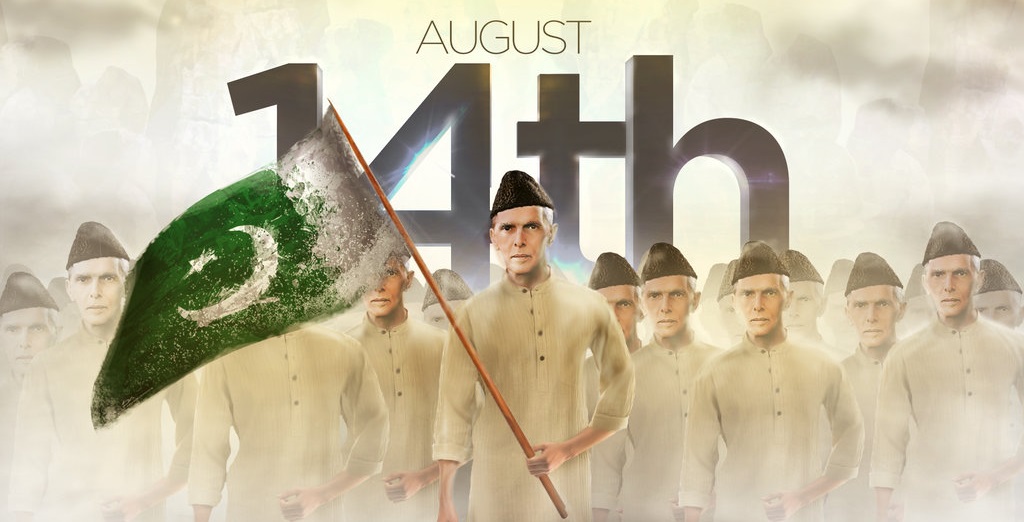 Independence Day of Pakistan is observed annually on 14th August. It is the day when the country achieved its independence and was declared as a sovereign nation at the end of the British rule in 1947. Pakistan Movement became the base of the creation of Pakistan. The Movement aimed for creating an independent Muslim state was led by All India Muslim League under the great leadership of Mohammad Ali Jinnah.

It is a coincident that the day of independence fell on 27th Ramadan, the day that is regarded as most sacred for the Muslims. The main ceremony of Independence Day takes place in the capital city Islamabad where the national flag is hoisted at important buildings including Parliament and president house. The day is usually celebrated with flag raising ceremonies, parades, patriotic songs and cultural events etc. Several award ceremonies are also held on the occasion. Citizens too, hoist national flags on top roof of their houses as well as on their vehicles.


14th August – Back Ground of the historic Day:

Historically, the area constituting Pakistan has been a part of British Indian Empire. The entry of East India Company was the first step of British in Subcontinent in the seventeenth century. In 1757 the company rule started with the Battle of Plassey. In 1857, after the Independence Movement, most of the Indian Subcontinent went under the direct rule of British Crown.

The period after the World War 1 was known as the period of British reforms. The widespread discontent of this period turned into non-cooperation and civil disobedience, non-violent movements and the circumstances led to self-ruled India.

The Muslims of the joined India realized that they were not only ruled by the British but after they quit India Hindus would become the next ruler and master of their fate. So in 1930 Allama Iqbal presented his idea of a separate religion-based state for Muslims. Three years later, Chaudhary Rehmat Ali proposed the name “Pakistan” for new Muslim state in a declaration.

In 1940’s the Indian Independence Movement intensified and so as the Muslim nationalism too. All the efforts were stimulated under the banner of All India Muslim League with Mohammad Ali Jinnah as the leader.

Being the most reliable party in order to secure all the interests of Muslim diaspora, Muslim League played a strong and decisive role during 1940,s in the Indian Independence Movement as well as developed into driving force behind creation of Pakistan as a solid Muslim state in the region of South Asia. From 22-24, March Muslim League presented a political statement named as Lahore Resolution, in a three day session of its party’s general session, which later called on for the creation of a separate independent Muslim state.

In 1946, the Britain’s Labor government realized that after the World War II and several other riots it had neither the mandate at home, the international support, nor the reliability of the British Indian Army to continue the rule over the increasingly rebellious Indian Empire and decided to quit British rule over the Indian Subcontinent. The Indian National Congress being the biggest party in the subcontinent demanded for a single state but Muslim League did not agree on living together with Hindus as a suppressed community. This situation resulted in a number of communal riots in South Asia.

Ultimately, the British government had to announce that the principal of the division of British India into two independent states was accepted. Viceroy Lord Mountbatten chose the 2nd anniversary of the Japan’s surrender in World War II as the date of power transfer. August 14 was chosen as the date of ceremony of power transfer to the Muslim state, Pakistan. On 14th of August 1947 a new dominion of Pakistan became independent. Mohammad Ali Jinnah sworn as the 1st Governor General of Pakistan.

The date of Pakistan Independence:

The power transfer was performed on the midnight of 14 and 15 of August and the Indian Independence Act 1947 witnessed 15 August as the day of independence of both Pakistan and India.

It was 15th of August when the nation observed its first birthday. But in subsequent years August 14 was celebrated as the Independence Day.

Pakistan Independence Day or the 14th August is regarded as one of the six public holidays observed in Pakistan and is celebrated in the entire country. All government and non-government offices, educational institutions, organizations, major markets, post offices remain closed on the Day. In order to prepare and finalize the plans for the celebrations of Independence Day, meetings are usually held in provincial capitals and are attended by government officials, politicians and diplomats. With the beginning of the month August special shops and stalls are set up across the country selling national flags, banners, posters, buntings, pictures of national heroes and many other celebratory items. Homes, private buildings, vehicles as well as street and roads are decorated with buntings and flags. Several organizations, government departments and educational institutions organize sports competitions, seminars, social and cultural activities leading up to Independence Day. In Karachi, for celebration, drives are initiated in order to clean and prepare the Jinnah mausoleum (Mazar-e-Quaid).

The day starts with special prayers of solidarity, integrity and development of Pakistan in different places including mosques across the country. There are some special festivities take place in the capital city, Islamabad, and commence with raising of national flag on the Presidency and Parliament as well following 31- gun salute in Islamabad and 21- gun salute in the provincial capitals. Both President and Prime Minister of Pakistan address the nation in their live telecast. During different rallies and events political leaders and government officials deliver speeches highlighting the Pakistani achievements and goals set for the future. They also recall and praise the untiring efforts and sacrifices of national heroes. In Lahore, Minar-e-Pakistan where Lahore resolution was passed in 1940 is also illuminated on this happy occasion in order to signify the importance of this place in the creation of Pakistan. Citizen including children used to be dressed up in the official colors of Pakistan i.e. green and white. They are also wearing some items with national on it like T-shirts, caps, wrist band and even ear rings, pendants and rings are also available in accordance with the Day. Public transport remains unavailable for all major routes. Traffic jam is a routine on this occasion especially on the Mall road Lahore.

A number of government buildings including Supreme Court, Parliament House and President House are also decorated and illuminated with bright colors and lights. Houses and streets are decorated with oil lamps, candles and national flags. Fire work is also a part of this celebration. National anthem is sung at different places like schools, government places, monuments and residences as well. Homage is paid to people who have lost their lives in the migration and riots during the creation of Pakistan in 1947, recipients of Nishan-e- Haider, martyrs of Pakistan Army, scientists, political figures and famous artists. At certain national monuments ceremony of change of guard takes place. The Pakistani diaspora celebrates the Independence Day in numerous countries all around the world as well especially in the countries which have huge Pakistani communities.

As the Independence Day approaches, security measures in the country are also intensified, especially in the troubled areas as well as in the big cities. Intelligent agencies along with representative of intelligence meet together for the cause of keeping a better law and order situation. High alert is usually declared in the sensitive parts like the capital city in order to restrict the security threats. Police also plays an active role security measures. Sometimes a big incident stops all the celebrations, for instance on August 13, 2010 because of high flood which claimed lives of 1600 people and affecting 1400 million people, the official celebrations of the Independence Day were dismissed by the president.

From the start of August radio channels start playing patriotic songs (milli naghmay), TV channels starts broadcasting different programs and shows related to the Day highlighting the background, history, achievements and culture of Pakistan. The events and riots during the creation of Pakistan are depicted in numerous literary and scholarly works like:

There are many patriotic songs that have become the part of the celebration like Dil Dil Pakistan, Sohni Dharti, Ha jazba e Junoon and many others. All these works narrate true story of the Pakistan movement and Independence with different aspects.

Pakistan Post has its own contribution in this context. In July 1948 it released 4 commemorative stamps for the country’s first anniversary. From these four, three stamps were depicting different sites of Pakistan while the fourth stamp was depicting a motif. All the four stamps were inscribed 15th August 1947 as the actual date of Independence was confused.

In 1997 Pakistan observed the golden jubilee of independence. On the occasion The State Bank of Pakistan issued a special 5 rupee banknote depicting the tomb of Baha-uddin Zakariya commemorating the 50th anniversary of the country.

In 1997, to mark the golden jubilee the 1997 Wills Golden Jubilee Tournament held in Qaddafi stadium, Lahore. During final of the tournament all the living test cricket captains were honored by Pakistan Cricket Board by parading them in the horse –drawn carriages as well as presenting them all with gold medals. Pakistan displayed the largest flag of the time on 14th August 2004 with the dimensions of 340 X 510 feet (100m X160m).

Official colors of Pakistan are green and white. White color represents peace and the green color symbolizes prosperity as well as good fortune.

It is a national holiday on 14th August in Pakistan every year. This year in 2015, the Pakistan Independence Day is being celebrated on the blessed day of Friday 14th August 2015.